What is Cinema Advertising?

Movies have an edge to them and have a greater impact on the audience, as they have a larger-than-life aura and leave a lasting impression on the audience. The reason that cinema ads work the most is because moviegoers stick to their seats while the ads are displayed as they wait for the movie, and are attentive towards the silver screen.

Indian cinema advertising market stood over $ 98 million in 2017 and is projected to grow at a CAGR of more than 25%, to reach $ 381 million by 2023, predominantly due to the growing number of multiplexes across India.

Multiplexes are increasingly helping advertisers to reach a larger audience across the country. Moreover, the Indian film industry is witnessing a significant growth with the rising number of films being produced each year, thereby further increasing scope for cinema advertising. Additionally, technological developments such as use of VFX is anticipated to aid the growth of India cinema advertising market in the coming years. 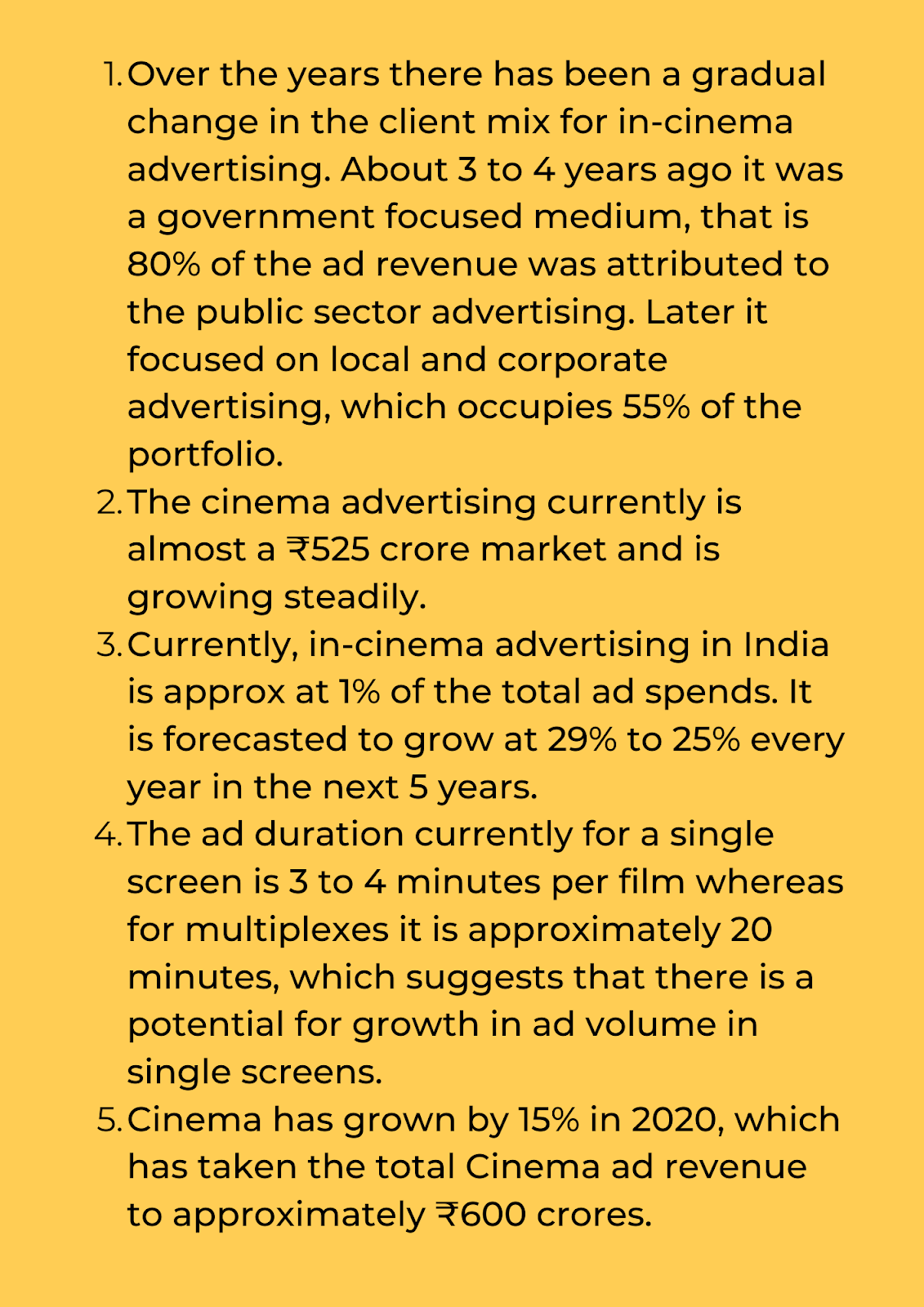 Film revenue received from in-cinema advertising in India from financial year 2014 to 2020, (estimates till 2024)

The most penetrated zone is South India, with 22% of the population visiting a theatre in the year 2019. Because of which, it has a contribution of 44% to the theatrical space.

Top 4 languages in which movies are watched in Indian theatres:

An average theatre-goer in India watches movies in 1.4 languages, with Maharashtra (1.6) and Kerala (1.7) that is, the highest multi-language incidence.

Effects of Pandemic and Revival of Movie theatres

In the year 2019, cinema experienced an unprecedented decline of 70.4% due to the pandemic which prompted a scenario of rethinking in the film industry.

Due to the pandemic movie theatres faced a massive decline, but it is expected to get back to normal in the next fiscal as COVID cases in India are in control and vaccination too is catching pace. Since brands have been trying to get back into action, they will soon start advertising in cinemas, which will lead to a V-shaped recovery.

Currently, the revenue of in-cinema advertising in India is around Rs 1050 crore, and is growing steadily.

Rahul Puri, MD, Mukta A2 Cinemas said that the audience have missed the experience of the big screen and it’s a great opportunity for advertisers to use this medium to advertise their products. He also added that the cinema ad revenue may grow by 10% in 2021 compared to 2019.

Cinema is considered to be the staple medium of entertainment for the Indian consumers and it also offers a captive audience which means better engagement opportunities.

The figure below represents the location preference of the consumers for watching new movies post-COVID 19;

What are the benefits of cinema advertising?

The cinema industry has been thriving for a long time now and is still growing because of its magic to encapture the crowds. In-cinemas advertising can be beneficial for the growth of your business due to its hyperlocal reach. Here are some of the benefits of in-cinema advertising;

Hall & Partners conducted a survey which found out that cinema works in a much better way than any other media. The ads that audiences watch in the theatres are processed by the brain more consciously, which creates a more emotional and powerful engagement with the brands.

Cinema advertising is said to be 8 times more effective than television, as it makes your brand stand out. Cinemagoers tend to identify and recall a brand three times more than TV viewers. Cinema audiences are also more likely to get emotionally attached to the ads than TV audiences. The experience factor that audiences get in the theatres is phenomenal and the impact of the big screen is such that consumers are twice as likely to retain the brand ads.

In-cinema advertising is ideal for businesses who want to target a particular demographic region. Movie theatres have a hyperlocal reach and cater to audiences who are at a certain distance (for example, 10-mile radius) from the theatre.

This also works brilliantly for the shops that are present inside the mall. Raymond, Lifestyle Business, Syska and Manyavar have heavily invested in cinema advertising to build the brands.

Many advertisers may think that the impact of movie theatres may have decreased due to the increase in consumption of OTT content. However, there has been no negative effect of the rising OTT platforms on cinema. In fact, the number of movies being released every month has increased, and the number of cinema screens in India is also steadily increasing.

In terms of OTT penetration, developed nations have a better and larger presence, but even there, the cinema market has not been negatively affected. According to some surveys, people who are the regular consumers of digital content are the ones who often visit theatres.

There has been an advent of OTT platforms in the last few years, however the cinema industry as well as in-cinema advertising has only grown that too at a phenomenal rate.

What are the most effective forms of cinema advertising?

As per the data from Kenter, 80% of the prime audience belongs to the higher socio-economic class.

Effective ways to advertise in cinemas during festive season

The pandemic had an adverse effect on the cinema industry, however the year 2020 and 2021 has been a game changer. The movie theatres saw a massive decrease in footfall due to COVID, but as theatres are reopening in most of the cities and with festive releases, audiences are actively visiting theatres.

The most effective way to advertise in movie theatres is on the basis of the genre and the movie released. It is always a good option to advertise your brand in a big budget or all star cast movie which is likely to drive in more audience. The festive season is generally the time for new releases and big budget movies, so it’s the best time to give your brand a boost.

Here’s a list of film genres that are most preferred by Indians;

Though the festive season is here and several all star-cast movies are getting released, audiences are still a bit reluctant to visit the theatres due to the pandemic. Hence, advertisers must take a few things into consideration while choosing the theatre for advertising. There are a few factors that are impacting the audiences’ decision to visit any theatre, advertisers must be aware of these factors too. This is because there is no point in advertising in a cinema theatre which won’t have enough audience.

This graph represents the factors that determines the decision to visit theatres;