About Advertising in Surya Comedy

Video ads are telecasted during ad breaks. The minimum duration for a video ad is 10 seconds and increases by a factor 5. Click on "Customize and Get Quote" and enter the ad duration in seconds, number of days, frequency per day and the timeband to know the cost of the campaign.

To advertise in Surya Comedy you can follow the following steps

1. Get rates for advertising in Surya Comedy on the Media Options and Pricing page. Do note that rates vary as per the time band. You should add the media to your Bag and select the time bands there.

2. Select the ad type that suits your budget, creative, and objective. Surya Comedy offer video ads, scrollers, Aston Bands, and Brand integrations for advertising. In addition, you can also pick from the digital ad formats.

3. Other factors that need to be decided are Ad length, Time Band, Total number of Ads, Campaign Duration and Start Date

﻿4.﻿ We will check the ad space availability on Surya Comedy and other privileges like discounts, depending on the time of booking

5. Submit the artwork and make the payment for advertising on Surya Comedy

6. Tentative log timings will be shared on a daily basis so the client can watch their Ads live being played on Surya Comedy.

Videos of Past Execution

Click here to view the videos of campaigns executed in the past.

We’re The Media Ant, India’s favorite independent TV advertising agency among small and medium-sized businesses. We believe India’s enterprising culture is something to be celebrated, which is why we’ve made it our mission to provide a targeted TV buying service that supports sustainable business growth at low TV advertising costs. We represent more than 950 TV channels – more than any other Indian agency – and now we want to join forces with you! 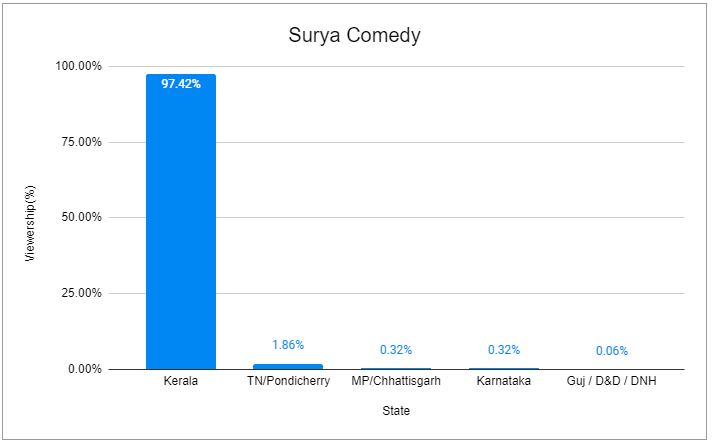 About Advertising in Surya Comedy

Advertising through Surya Comedy is an effective advertising method in the Television media type. Advertising in Surya Comedy will help the brand to reach out to the right target audience. Television advertising helps the advertiser to target a very large group of audience and also provides the ease of targeting a specific time band based on the requirement. Advertising through Surya Comedy is popular for a brand that is trying to reach out to a large number of premium users within certain geography in a small time. Because the Channel carries different sets of programs, it appeals to almost everyone in the family thereby assuring a complete household reach. Surya Comedy is the leading Television Channel and is strongly recommended for all marketing campaigns.

Rates for Advertising in Surya Comedy

How to select the right Agency for advertising in Surya Comedy

Media Agency can play a critical role if you are planning to advertise in Surya Comedy. There are several roles that a media agency plays while executing your TV campaign. Firstly, the media agency will help you in deciding if advertising in Surya Comedy is right for your brand. The agency uses BARC data to decide the TG and Surya Comedy viewer profile matches. Once you have decided to go ahead with advertising in Surya Comedy, the next step for the TV ad buying agency is to plan the frequency and timing for the ads (called spots) and negotiate the right price. Scheduling of the ads will depend on the campaign objective and the pricing. While advertising in the prime time might give you the maximum reach but the agency might recommend non-prime time as it provides a lower cost per reach. Various such variables can be tackled by the media agency while buying ad space in Surya Comedy. The last role of the TV ad buying agency is to ensure that the ad is played on Surya Comedy and provide the advertiser with the number of people who saw your ad. The Media Ant being an authorized agency for ad planning and buying on Surya Comedy provides a data research-backed plan and ensure that you get the best rates. In case you need any help with planning, please contact Help@TheMediaAnt.com.

Why Advertise in Surya Comedy

The rate to advertise in Surya Comedy is one of the lowest among all other news channels in India. Its popularity in the Hindi belt makes advertising in Surya Comedy a critical part of any Television campaign. Surya Comedy advertising rate is available on the Media Option and Pricing tab of our website. These are the current ad rates and are updated weekly. Surya Comedy has popular programmes and TV anchors. Because of this, the engagement of viewers is very high with the channel. The Media Ant is an authorized advertising agency that can help you plan and buy ad spots in Surya Comedy at the lowest rate.

How does Advertising in Surya Comedy works

a) Video Ads - Video ads are telecasted during ad-breaks. The minimum duration for a video ad is 10 seconds and increases by 5.

b) L Bands - Aston Bands are thin horizontal strips that appear during a program at the bottom of the screen. The Aston Band duration per exposure is 10 seconds. Choose the number of Aston Bands per day and the total number of days you'd prefer to advertise. Prices vary according to the time band chosen.

c) Brand Integrations - These are custom media options and are created basis your advertising budget and the objective.