About Advertising in Wynk Music, App

An audio ad of not more than 30 sec is supported by a clickable banner ad .

Rectangular Image ad (Banner) which will appear on all the pages.

Pre-roll/ mid-roll video ads with a duration between 10 to 30 secs that are skippable or non-skippable are played.

About Wynk in 60 words

How does Wynk work?

Why Advertise on Wynk?

Launched in 2014 by Airtel, Wynk Music is today India’s No.1 music app with over 75 million app installs. The platform has both audio and video ad across its platform. It is the second-largest most used video app.

1. Brands should advertise on Wynk who are looking at different targeting options such as- Age, Gender, Device, Telecom,

3. Wynk highly engages 41min per user per day on the app.

1. Banner Ads- companion banner will be complimentary with the audio ad and stays till the ad plays whereas persistent banner will be charged extra (40% extra of audio ad) and stays for the next 5 songs after the ad.

2. Audio Ads- the advertiser will get 100% SOV. While the ad plays, a companion banner appears, and once the music resumes a persistent banner stays on the screen. Companion Banner is of 300 x 250 while Persistent Banner- 300 x 50.

Who should advertise on Wynk?

Wynk users mostly belong to the 18-34 age group. Brands that are willing to focus on young audiences should advertise on Wynk.

3. Brands from the music and entertainment industry.

Screenshots of Past Advertisers 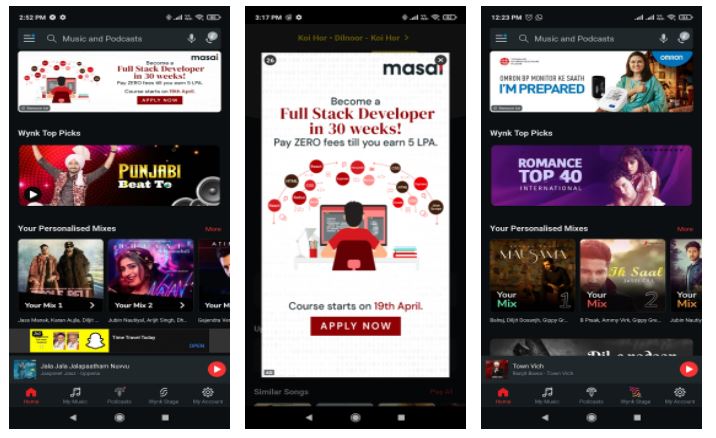 Step 1:  Add Media to the Dashboard

Step 2: Customize it as per your requirement using the filters below:

When the campaign is live, you will get a screenshot of the ad within 24 hours.

After the completion of campaign, an Excel Report will be shared to the client.